Golden Circle tour – the best of Iceland in half a day

The nature of Iceland has something that stops me every time. Every time I visit, Iceland reminds me of where I feel most at home. Something about the rugged wilderness, volcanoes, and wild horses always calls me home. The Golden Circle tour must be one of the most popular day tours in Iceland because it covers so many of the country’s best nature spots and it can be done in a day. The Golden Circle tour divides opinions because it is extremely popular especially during the high season.

We were in Iceland with a group of travel bloggers in March and completed the Golden Circle tour in a day. Of course, there were tourists in each location we visited, but I would still warmly recommend the golden tour, especially to everyone visiting Iceland for the first time. 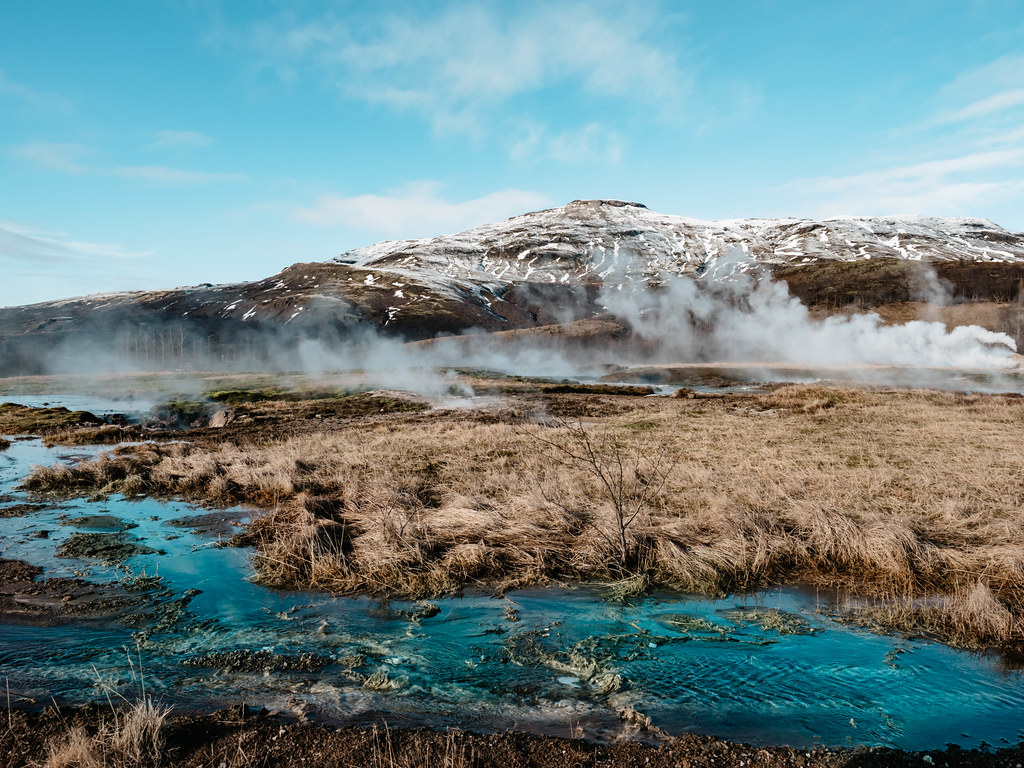 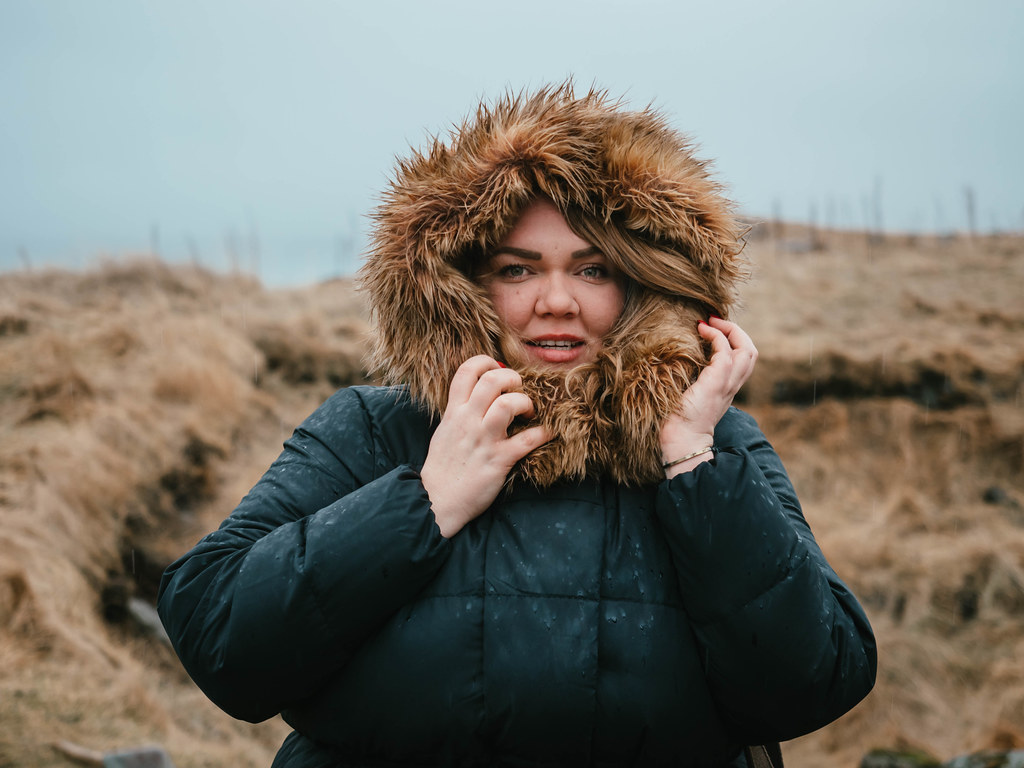 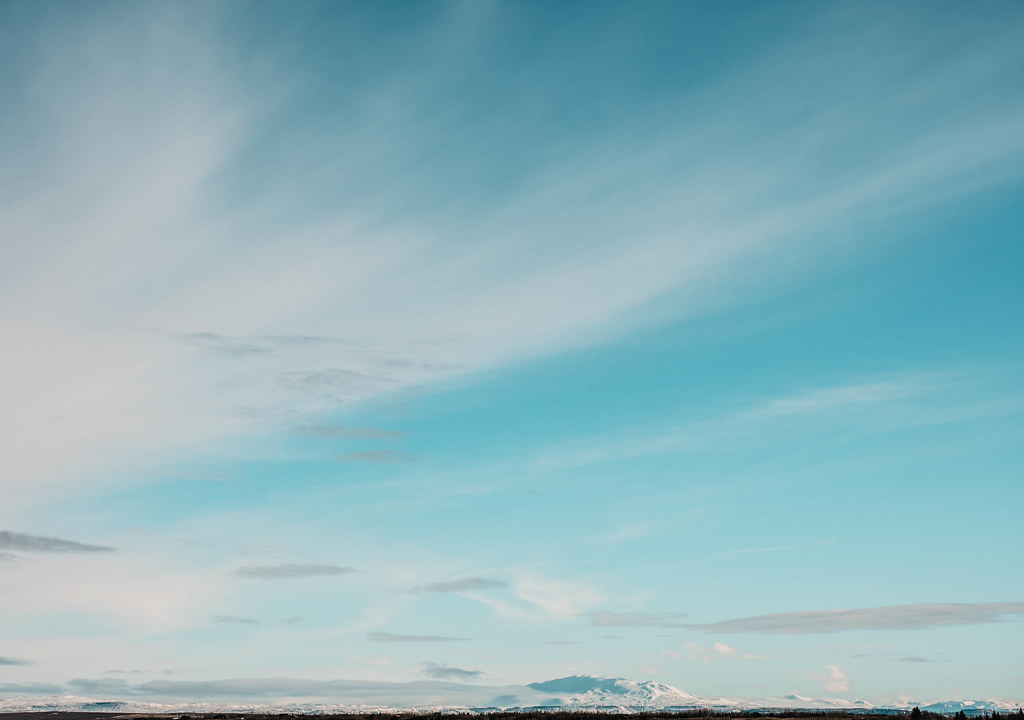 Golden Circle tour Iceland: good to know before you go

The Golden Circle can be experienced by driving your own rental car or by taking part in a tour organised by a local tour operator. I have booked all my tours, including on previous trips, through Reykjavik Excursions, and I can give them a glowing recommendation. See different options for tours and tour prices for a Golden Circle day tour here.

There are three main sights to see during the Golden Circle tour; Þingvellir, Haukadalur, and Gullfoss. Along the way are other sights worth stopping for. I will introduce all the ones we stopped at during our trip in this post. The whole route is around 250 kilometres long.

If you want to drive through the Golden Circle route, you can rent a car directly from the Icelandair website by choosing “car rental”. I don’t even have a driver’s license, but in general driving in Iceland looks easy and the roads are in good condition. In the winter, the weather in Iceland can be harsh, and it’s important to find out if you need a four-wheel drive for your route. You should plan to use at least six hours on the day tour.

Even though the traffic in Iceland is safe, it’s mainly tourists who cause accidents by not understanding how quickly the weather can change or stopping in the middle of the road to photograph horses or northern lights. Be sensible, even when there are beautiful scenes behind every corner.

Toilets, restaurants and souvenir shops can be found nearly everywhere along the way. Sometimes you need to pay for access to the toilets, but paying is easy as credit cards are also accepted.

It doesn’t come as a surprise that the Golden Circle is one of the most popular day tours in Iceland and it is busiest during the summer months. Iceland has plenty of tourists all year round, but spring, autumn, and winter are calmer. 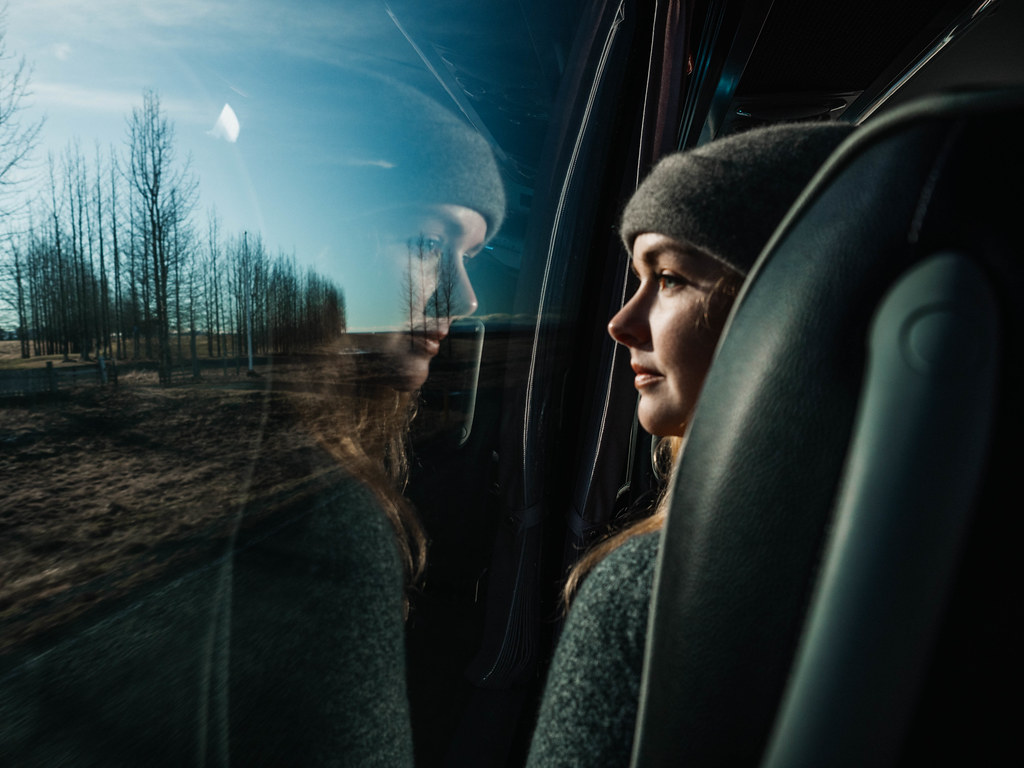 In the picture: Kathrin from Luminoucity blog 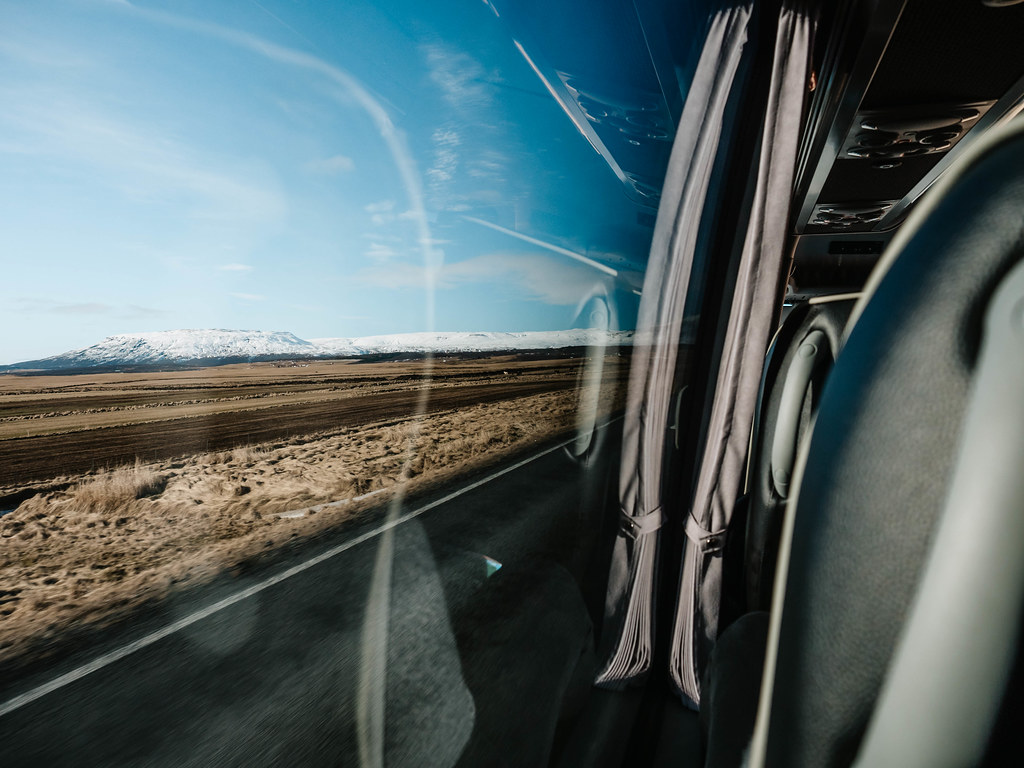 Þingvellir at the boundary of tectonic plates

Þingvellir is one of the most interesting destinations of the Golden Circle tour and the whole of Iceland because of geography and politics. It’s unique because of its location on the boundary between Eurasian and North American tectonic plates.

Located in southwestern Iceland, Þingvellir is also famous for another reason, as the sessions of the national parliament of Iceland were held there from the 10th century onwards. In addition, the area is made more interesting because of its geology including the movement of the earth’s crust and volcanic activity. Never bored in the Icelandic nature.

Usually, the walk at Þingvellir goes through the boundary of the tectonic plates up a hill, where you can marvel at the scenes of the national park. To be honest, the destination might not be visually as interesting as the geological story that helps you understand Iceland’s nature, so I recommend stopping and experiencing the site during your own Golden Circle tour. 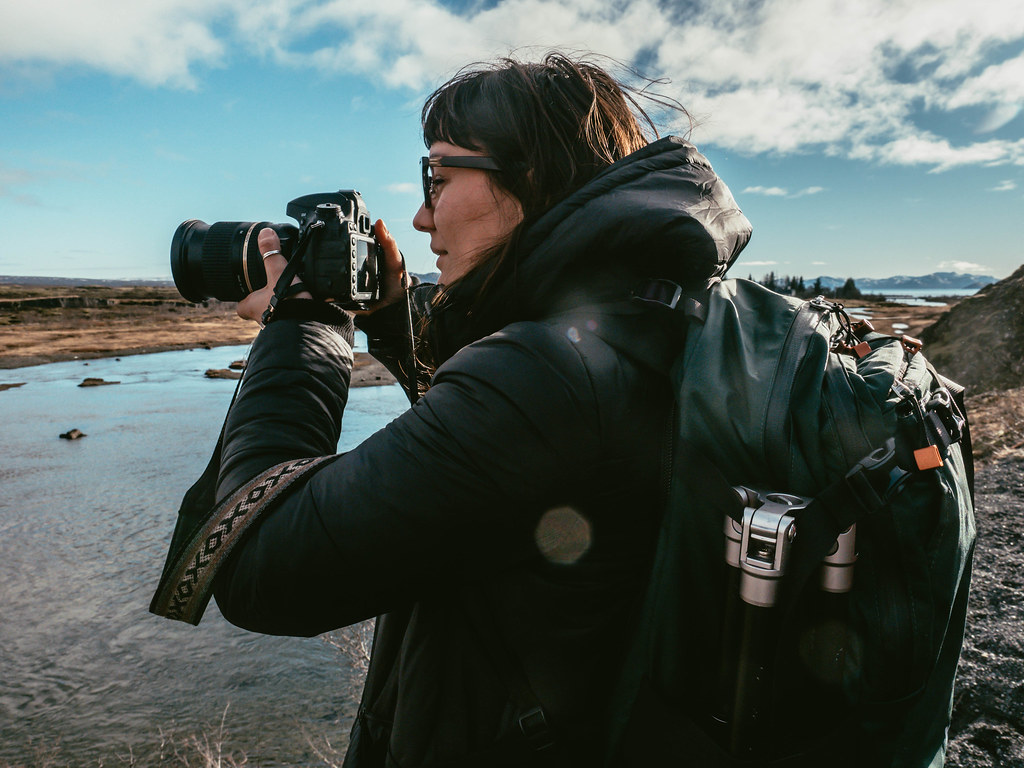 During our trip, we also stopped to wonder at the hot springs which erupt regularly reaching several metres off the ground with incredible power. Geysir is, of course, a geyser and in fact this is where the name for these hot springs initially came from.

At the moment, Geysir doesn’t erupt at all, but the neighbouring geyser called Strokkur erupts every 10-15 minutes every day. Strokkur is always surrounded by tourists and dedicated photographers all year round, waiting for the next eruption. The water shooting up to nearly 30 metres high does look fairly spectacular. While you’re in this area, it’s worth marvelling at the different small hot springs, which bubble with turquoise water. In principle, a new geyser could erupt from the ground at any point in time in this area, so you should be careful and stay within the marked areas.

Strokkur is located in a geothermal area near river Hvítá and is a popular spot around the year. 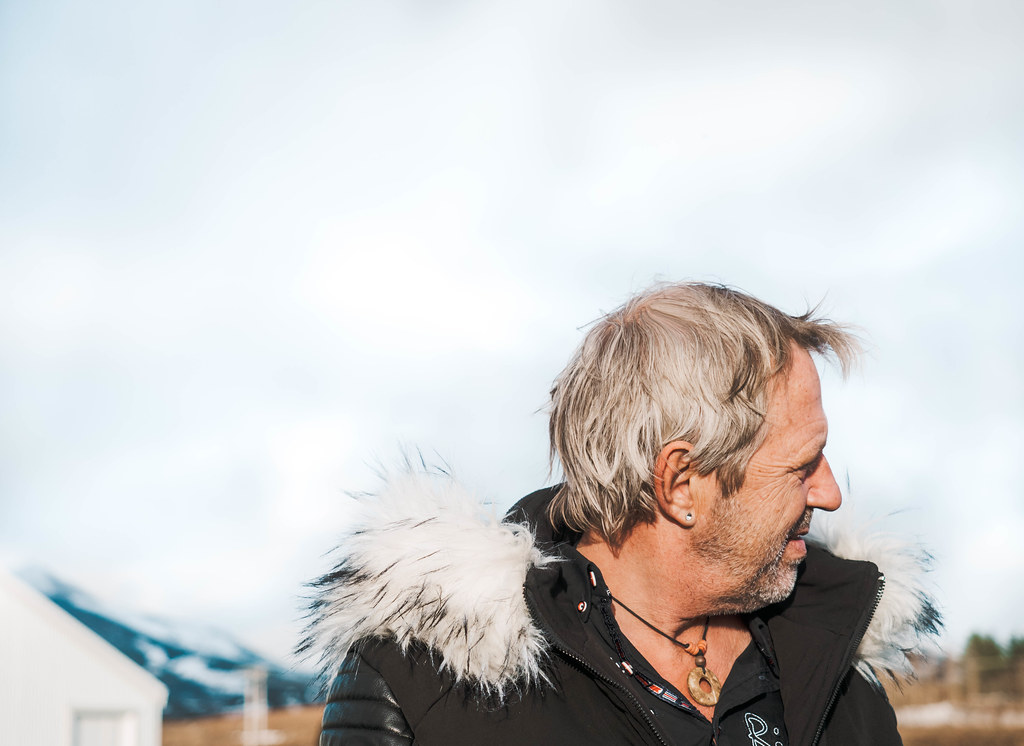 My favourite destination of the Golden Circle: Gullfoss waterfall

Around Iceland, you will find mesmerising waterfalls, one more magnificent than the other, and these can, of course, be found along the Golden Circle route. The Gullfoss waterfall cascades with such force that it makes a tourist fall silent. The unusual grey and turquoise colour of the water comes from the glaciers in central Iceland, the water can even sometimes bring out ash from erupting volcanoes.

The Gullfoss waterfall is located at the furthest point of the Golden Circle, and it’s a good starting point for staying on schedule for the rest of the day especially when driving your own car. We made an additional stop at the waterfall Faxi, and if you have the time, I recommend doing so. 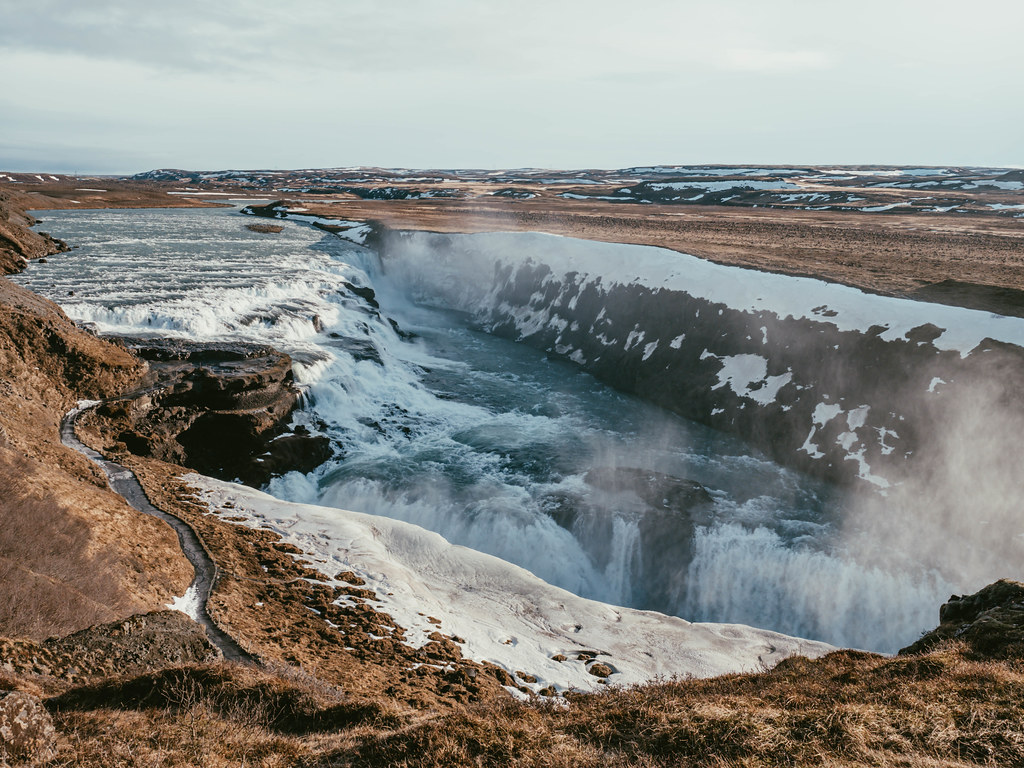 In the middle of the day, we stopped at Efstidalur farm to have lunch. The farm is special in that some of its dairy and meat products come from the animals which live literally in the same building with the restaurant – you might be eating your burger while watching the cows. While especially for the more sensitive readers shoveling down a burger next to a cow may feel weird, the farm focuses on responsible farming, and the animals are cared for in the best way possible.

Efstidalur farm is also an excellent place for a gourmet, who wants to have the opportunity to enjoy and experience genuinely authentic tastes. We enjoyed, for example, Skyr, originally from Iceland, in its traditional form and delicious meat soup with good wine. Skyr is actually lumpy and dry, but it is mixed with cream and sugar. 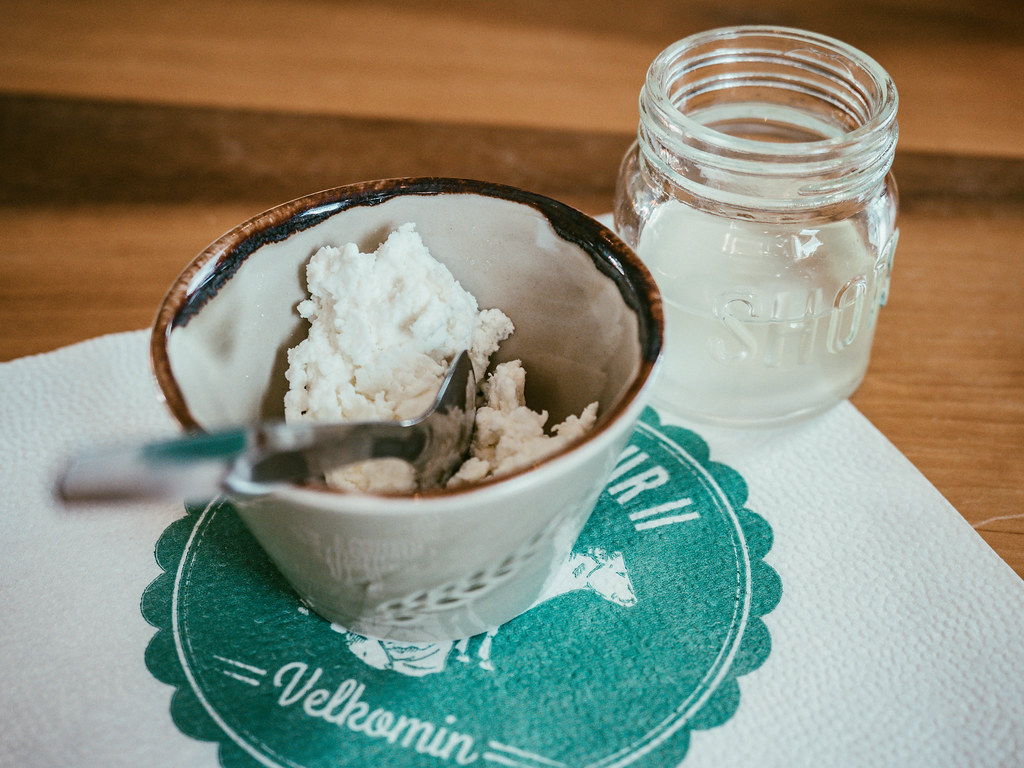 A horse girl like me can’t visit Iceland without seeing Icelandic horses. The Golden Circle tour doesn’t necessarily include a visit to a horse farm, so check beforehand, if you are taking part in a group tour. Golden Circle offers magnificent views even from the car seat and it’s very likely you will have the chance to admire these small fluffy horses along the way, but if you want to get up close and personal, I recommend stopping at Laxnes horse farm and if you have the time, taking part in a riding tour.

The most important thing you need to know about Icelandic horses is that you should never call them ponies – I learned this the hard way, haha. In addition, two of the horses on this farm have acted in the popular Game of Thrones series!

The Laxnes farm is not far from Reykjavik and you can, of course, drive there separately if you are in Iceland for several days and take part for example in a riding tour. Read more about the Laxnes horse farm and its tours here. 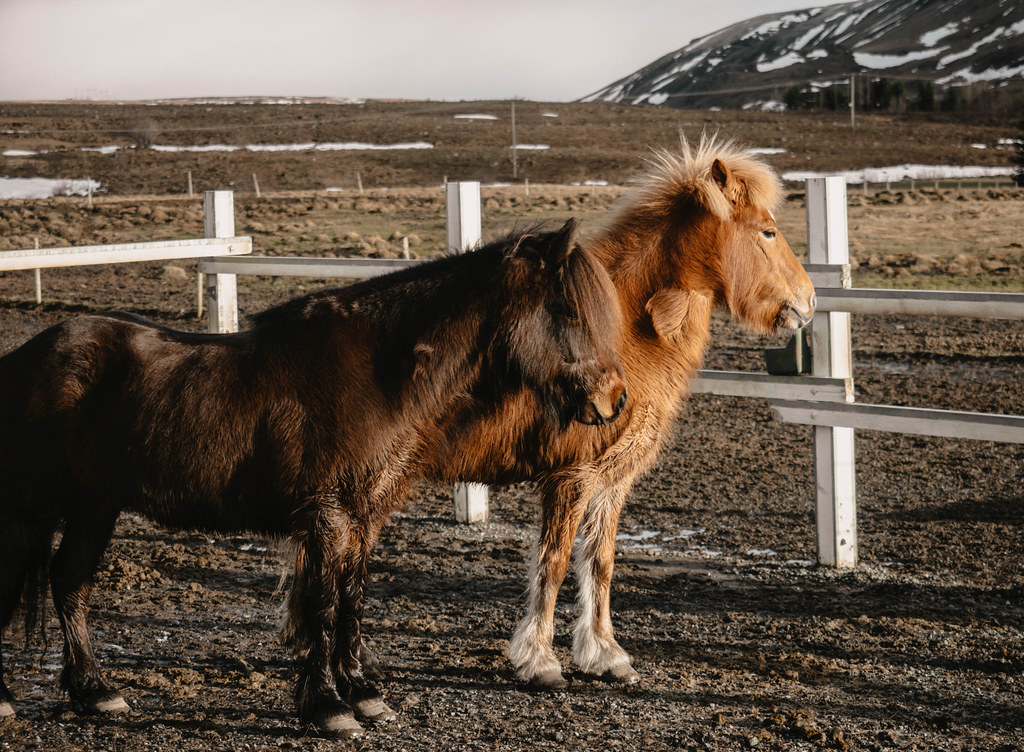 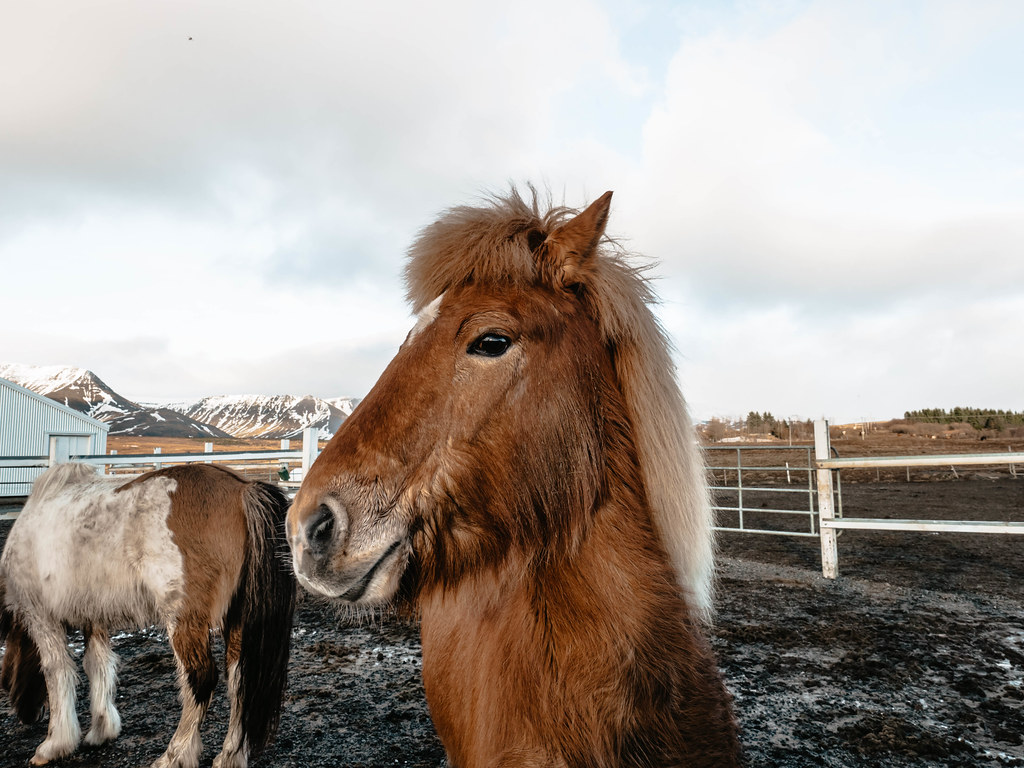 I can warmly recommend the Golden Circle tour in Iceland for any tourist, as it is popular for a reason. It provides you with an easy way to see the best sides of the country’s nature and an idea of what this wonderful island has to offer as a whole. It is good to understand beforehand, that this is a busy route all year round. Please respect Iceland’s nature and use the allocated routes.

Book tours to areas near Reykjavik:

Paris Travel Guide: Top Things to Do in Paris

Growing up without a father is not painful. Father