*In paid collaboration with: Tourism Ireland

The rain was pattering on the car windows while the Atlantic Ocean was hitting the cliffs down the shore beside the highway. An autumn storm had arrived to Northern Ireland, but that didn’t slow us down on exploring Northern Ireland in the footsteps of Game of Thrones with Giant Tours.

I joined this tour with a bit of an sceptical mind as I actually never watched Game of Thrones nor have I been too keen on giving it a proper try either, but it was a part of a press trip I did so I just went along with it – and a funny turn of events, it was one of the most incredible adventures I’ve done!

I mean, these guys behind the hit TV-show have done a lot of research finding the most spectacular backdrops for their fantasy drama, so even without GoT interest, I bet you’ll see some incredible sights throughout the day.

What makes this exact tour one to experience is your guide Flip, who was actually the stand-in for Hodor in Game of Thrones – and I must say, Flip is such a kind soul and a pro at driving the coastal roads, so you couldn’t ask for a better person to join you along this journey!

There are also other tour operators in Northern Ireland arranging Game of Thrones tours, but all with a big tourist bus which takes away at least half the character – and there’s some filming locations you cannot even reach with a big tour bus, so I just cannot say it strongly enough how much I recommend Flip and Giant Tours for your Game of Thrones filming locations tour.

Get to know Giant Tours and book your Game of Thrones day trip here.

If you end up making your booking through me, please give Flip a hug from me! 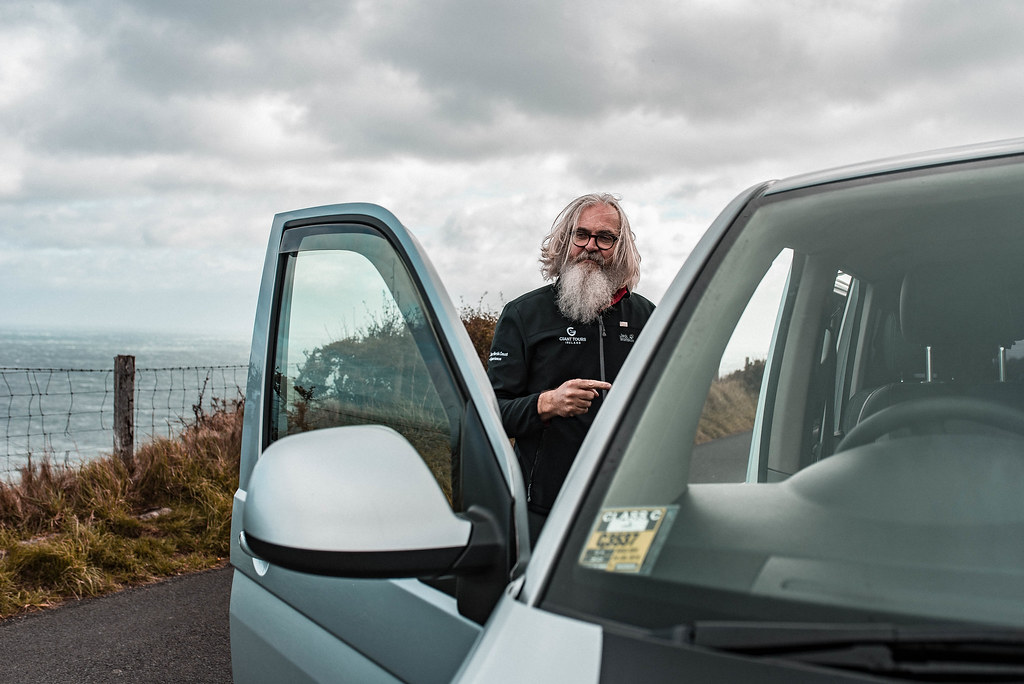 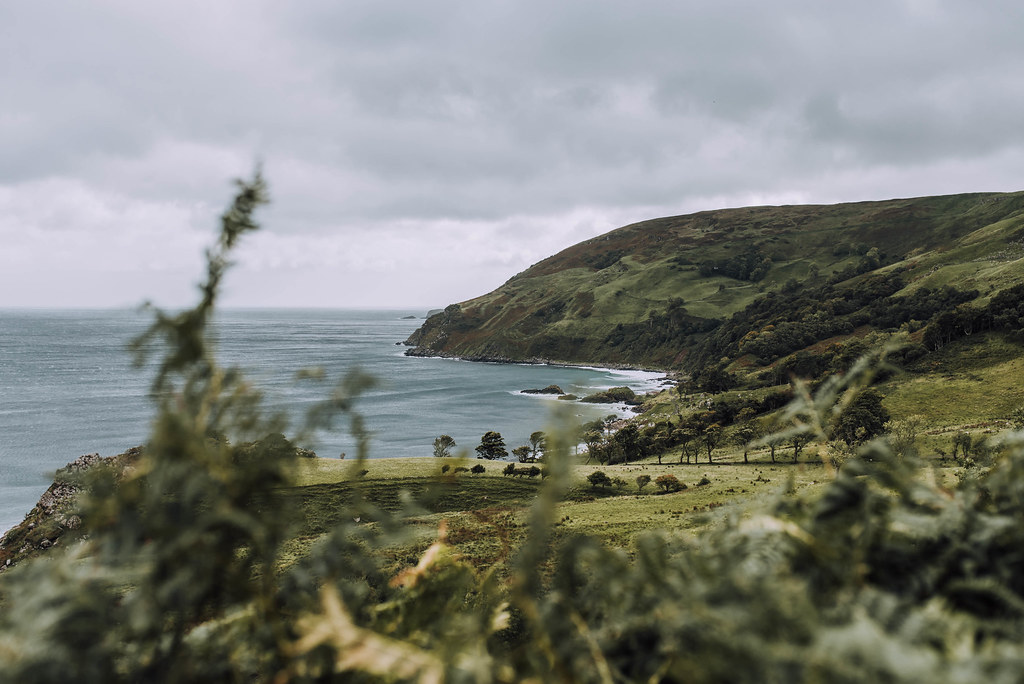 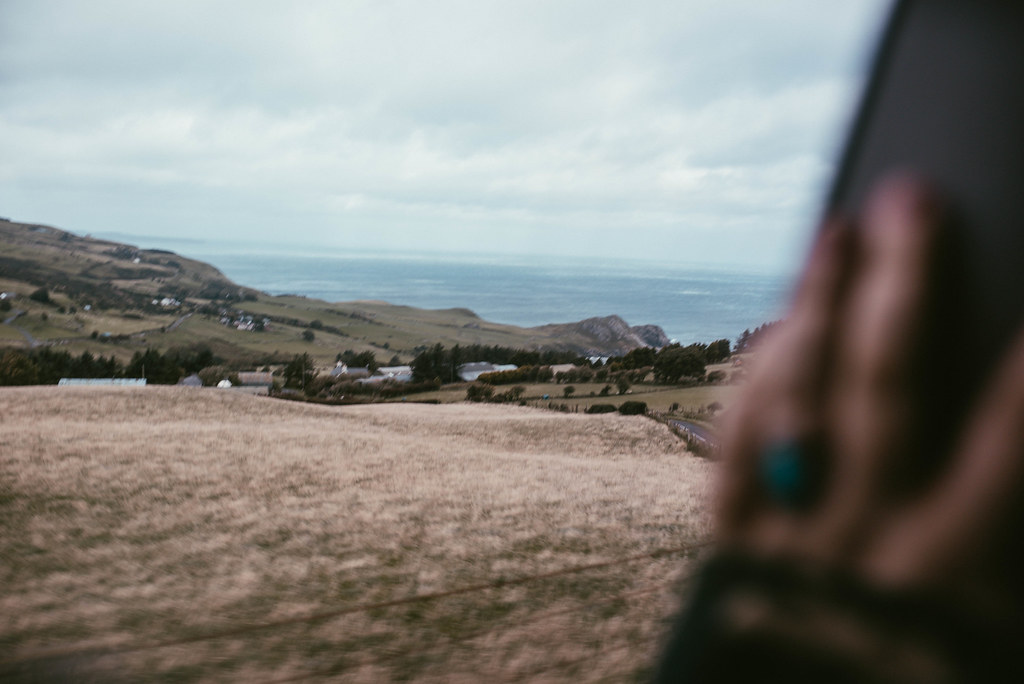 During the Game of Thrones day trip you’ll be visiting the following places:

The tour is done with a comfortable mini van VW Transporter Shuttle. This private Game of Thrones is best done with a small group, where the price will be cheaper per person, but the tour can also be done just as a couple even.

The tour normally starts from Ballycastle, but there is an option to be picked up from Belfast or Derry. If you are spending a long weekend in Belfast, I would definitely recommend a day out in the nature, having Flip pick you up with the mini van from Belfast. Our Game of Thrones trip was a part of a press trip, so it was adjusted to fit our tighter schedule. But in this post I’ll share the places you’ll visit on a normal tour.

The morning starts from Ballycastle at 9am and you’ll make a stop at The Stormlands, which is a cliff area by the ocean on the beach and known as one of the areas of the Seven Kingdoms. Then your journey continues onwards to Mary Mcrde pub, which has one of the ten doors of the TV-show.

In the beginning of our trip we also visited a goldsmith where they actually produce a lot of the crowns used in Game of Thrones – and you might even get to try one on yourself!

From here the journey went onwards to the breathaking Renly’s Camp and Slavers Bay.

On a stormy weather the stop at The Iron Island Lordsport Harbour can be intense, but that shouldn’t stop a true fan.

Halfway during the day we stopped for lunch at Fullerton Arms, which is also home to one of the ten doors. Normally lunch is not included, so you can arrange that individually – and Fullerton Arms doesn’t serve the most delicious of meals or the kindest service anyway, so in my opinion you are better off dining elsewhere away from the tour bus crowds.

At the end of the day, we drove to Kingsroad to see the famous Dark Hedges, which to me were most familiar through Instagram. Dark Hedges was actually already built by the Stuart family in the 18th century to impress their guests back in the days. The story tells that as the dawn falls, you may still spot the ghost of They Grey Lady hovering around the trees.

The day tour ended around 6pm.

I’m sure the tour is perfect for a Game of Thrones fan, but I can truly say I enjoyed every bit of the way capturing those photogenic places along the road. What’s included and what’s not?

The most important thing to bring with you is suitable clothes and a camera to capture the experience. I highly recommend wearing hiking shoes, or at least comfortable sneakers that can get wet and dirty. In Northern Ireland they don’t just have four seasons in one day, but at times even in one hour. So pack well for the day ahead!

✓  Transportation in a long wheel base VW Transporter Shuttle If Game of Thrones tour is just not your jam, Giant Tour also arranges a full day trip for Causeway Coast and Glens. You’ll spend the day viewing the iconic sites; the remarkable and breathtaking scenery at the world famous Giant’s Causeway and the thrill of the Carrick-a-Rede Rope Bridge.  Then you’ll travel along the equally famous and dramatic Causeway Coastal Route. Explore cliffs and beaches of the North Atlantic coastline, experience some of the ‘off-the-beaten-track’ tranquility and charm of the diverse and beautiful Antrim Glens that look over the Irish Sea to Scotland.

Flip will be the perfect guide to have along the journey as he has a background in environmental science and can share a lot of interesting information on the local nature and wildlife. What else to experience in Northern Ireland?

We spent most of our adventure wandering around Northern Ireland. We started our journey from Belfast where we spent the first day on a GIN tour with Taste & Tours, while getting to know the fun local pub scene. You can find all their tours here.

Another must-experience in Belfast is the Titanic museum. The famous ship was built in Belfast and the history of the city relies strongly on this tragic story. During our time in Belfast, we stayed at the new fabulous Grand Central Hotel, but I can also recommend the Titanic hotel located in the Titanic Quarter.

From Belfast we drove north to experience The Gobbins cliff walk, which too I am happy to recommend. They warn you about the physical challenges you may face, but trust me, if I could do it, you can do it too.

I’ll try to get more Northern Ireland stories on the blog as soon as I manage, but meanwhile I recommend to go check the Ireland Instagram Stories Highlight on my profile to see some of these experiences in video format! Honey, ain't there no place like Geneva – tips for a perfect getaway!